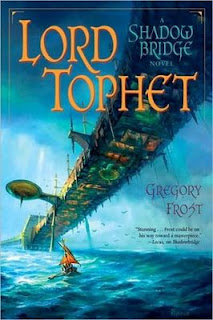 Leodora.mp3
Sci-Fi Song #15 was inspired by the Shadowbridge/Lord Tophet duology by Gregory Frost. This song is sung from the point of view of Diverus, the main character's musical accompanist. To learn more about Shadowbridge and Lord Tophet, check out these great reviews at the following blogs:

Leodora
by John Anealio
Diverus is my name, we're here to entertain you
I play the shawm while Lea works her puppets
We perform our show everywhere we go
But we're running from the agents of Lord Tophet


Can we live happily ever after walking span to span?


Bardsham was her father, Leandra was her mother
but Soter raised her since she was a baby
She wears a painted mask, she says her name is Jax
now she's the only woman who can save me


Can we live happily ever after walking span to span?


Here are some of the tools that I used to record the track:
Related Posts: