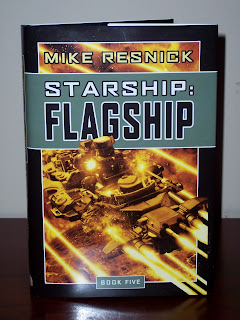 The Ballad of Wilson Cole (Acoustic).mp3

Here's an acoustic version of my song: "The Ballad of Wilson Cole". The song was inspired by Mike Resnick's "Starship" series of books. The sheet music and lyrics for "The Ballad of Wilson Cole" appear in the appendix of Resnick's "Starship:Flagship". The song features five verses; one for each book in the series. Click here to read more about it.

This is a bare-bones version of the song; just acoustic guitar (in DADGAD tuning) and vocals. I intend to release a version of the song with a more fully orchestrated arrangement. Perhaps that will see the light of day in January or February. Completing my new NaNoWriMo and Holiday songs as well as releasing my Sci-Fi Songs album took up most of my time over the past two months.

Considering that this song is supposed to be a folk hero ballad, I think that the stripped down approach works pretty well.

I hope you enjoy it,

The Ballad of Wilson Cole
by John Anealio
Verse 1
In the time of the Galactic Era
In the year of 1966
Commander Cole had to wrestle control
from the Polonoi running the ship
and despite his four medals of courage
they court marshaled him anyway
the men of his crew came to his rescue
and embarked on their own deep in space
Refrain
Yes they say Wilson Cole was a hero
and the captain of the Teddy R.
He kept up the fight and he did what was right
as he led his fleet through the stars
Verse 2
Then it came to 1967
after the ship's mutiny
they made a deal with David Copperfield
and they allied with the Valkyrie
And he didn't make much of a pirate
Wilson was an honest man
he went and retrieved a Tale of Two Cities
and decided that he'd change his plan
Refrain
Verse 3
Then they became mercenaries
the year was 1968
Their destination was Singapore Station
so they met at the Platinum Duke's Place
Then they met the Teroni Jacovic
who became the ship's Third Officer
Cole marshaled One Thousand Ships against a lunatic
Csonti retreated then went berserk
Refrain

And then in 1970
Cole infiltrated Deluros VIII
He aimed his gun at the Admiral just as the sky filled
with enemies set to invade
Wilson Cole led the Theodore Roosevelt
and the ships of the Republican Fleet
The enemy was defeated and the Secretary ceded
Cole's mission was finally complete
Refrain
Posted by Unknown
Email ThisBlogThis!Share to TwitterShare to FacebookShare to Pinterest
Labels: DADGAD, Mike Resnick, Pyr, Vocal Songs