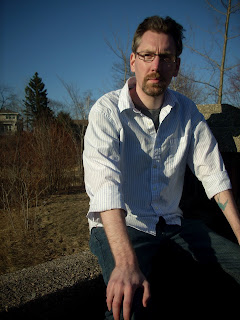 Chris F. Holm was born in Syracuse, New York, the grandson of a cop who passed along his passion for crime fiction. His work has appeared in such publications as Ellery Queen’s Mystery Magazine, Alfred Hitchcock's Mystery Magazine, and THE BEST AMERICAN MYSTERY STORIES 2011. He’s been an Anthony Award nominee, a Derringer Award finalist, and a Spinetingler Award winner. His first novel, DEAD HARVEST (Angry Robot Books, February 2012), is a supernatural thriller that recasts the battle between heaven and hell as Golden Era crime pulp. Its sequel, THE WRONG GOODBYE, comes out in September.  Find out more about Chris at chrisfholm.com and follow him on Twitter @chrisfholm


My Top Five Artists of All Time. The topic every music-nerd loves and dreads in equal measure. I mean sure, we love to analyze, to dissect, to batch and bin and label and list. But it's one thing to list your Top Five First-Wave Punk Singles ("Alternative Ulster," "Sheena is a Punk Rocker," "White Riot," "Ever Fallen in Love," "Watching the Detectives"), or the Best Five Songs to Feature A Slide-Whistle (uh, "Groove is in the Heart" and presumably four others). Those are playful. Reductive. Low-pressure. But it's something else entirely to pin the sum total of your musical tastes to five artists. It's like thinking back over a lifetime of glorious meals and narrowing it down to the five best bites of food you've ever tasted. Even a Top Five Albums list would be easier; even flawed artists make perfect albums on occasion (both Exile on Main Street and Exile in Guyville come to mind) and some musicians bang out one-off strokes of genius before fading into creative obscurity (Loveless or Endtroducing, for example), but marrying yourself to five artists' whole catalogs is far trickier. I mean, do you go with your gut or take the desert-island route, picking a well-rounded list of stuff you could spend a lifetime listening to and not get bored? Do you consider only current faves, or does that first artist that ever grabbed you (Michael Jackson; hold the jokes) still hold sway? Do you stop vamping and just get to the effing list already?

Yeah, probably that last one. So, without further ado...

Over the course of his 26 years on this earth, Nick Drake quite simply wrote the prettiest songs ever recorded. Hearing him for the first time was a revelation. I'm someone who gets obsessed with songs easily; when I find one that grabs me, I'll play it on repeat for hours, sometimes days. Drake's "Northern Sky" no doubt set the record, though -- when I discovered it, I must've listened to nothing else for weeks. And his final record, Pink Moon, is (at a mere 28 minutes) pretty much the pinnacle of what one man and a guitar can do.

The mid-'90s were all about gimmick-instrumentation. Alt-rock with a piano! (Ben Folds Five.) With a trumpet! (Cake.) With a violin! (Dambuilders.) And none on paper sounded gimmickier than Morphine, what with their two-string slide bass and baritone sax. But Mark Sandman's stunning songwriting -- by turns funny, creepy, and heartbreaking -- elevated them well above gimmickry, and by his death in '99, they'd recorded five spectacular records, three of them stone classics. Morphine is a slow drink of whiskey, a sultry dame half-glimpsed across a smoky bar; is it any wonder this noir-geek fell in love with them?

I'm a huge fan of hip hop, but even folks who aren't love Tribe. Pop on The Low End Theory and people dance, it's as simple as that. And Midnight Marauders may well be even better. I've been listening to Tribe since '91, and they still never fail to make me smile. If that ain't worth a top five spot, I don't know what is.

Yeah, okay, I'm cheating, lumping Neko Case in with Newman and the NPs. Sure, she's a member of the band, but their brainy, ebullient power-pop is all Newman's doing (a fact his may-as-well-be-NPs solo output reinforces), and pretty far afield from Case's haunting alt-country. Thing is, though, Newman's solo stuff led me to the NPs, who in turn led me to Case, and they're so intertwined in my mind, I couldn't pick between them. Both (er, all three, even though Newman and the NPs are interchangeable) are amazing. Both are goosebump inducing. And both are on my list because I say so.

Sorry, Dylan -- Costello's got my vote for best songwriter of all time. He's also my first pick for the artist whose catalog I'd choose were I stranded on a desert island. His stuff runs the gamut from punk to folk to jazz to God-knows-what, most of it damned good, and he's crazy prolific, so I'd have plenty to listen to. Though truth be told, I'd mostly just listen to My Aim is True on repeat. It is, in my humble opinion, a perfect record.