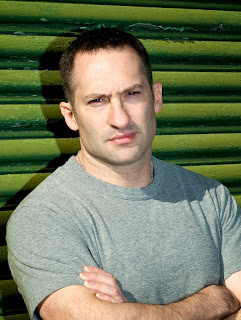 As a secu­rity con­tractor, gov­ern­ment civilian and mil­i­tary officer, Myke Cole’s career has run the gamut from Coun­tert­er­rorism to Cyber War­fare to Fed­eral Law Enforce­ment. He’s done three tours in Iraq and was recalled to serve during the Deep­water Horizon oil spill.  All that con­flict can wear a guy out. Thank good­ness for fan­tasy novels, comic books, late night games of Dun­geons and Dragons and lots of angst fueled writing.  His military fantasy novel, Control Point is available now through Ace.  Find out more about Myke at mykecole.com

Picking 5 top musical acts is really tough for me. My tastes are super broad and I work overtime to keep up on what's happening in music all around the world. The problem is that the US has been dominant in the global music market, exporting American tastes to other countries to the point where many of them have laws requiring local radio to set aside airtime for local artists. Now, I'm a big fan of the fantastic music we produce here in the US, but there's a lot of great stuff out there in other countries (and other languages) that you can miss out on. To counter this, I CONSTANTLY listen to netradio (through iTunes mostly, where I surf the channels in the radio section) and I am always flipping channels between US based and international stations. For some reason, I find I prefer French stations, which play a good mix of American music, French artists and North African and Arab musicians.

Another thing to point out: When I write, I almost exclusively listen to movie soundtracks. They put me in a cinematic mood without distracting me with lyrics. They also help drown out the sound of the public places where I prefer writing (libraries, coffee shops).

But it appears, John Anealio, that at an early age your human heart was plucked (still beating) from your breast and replaced with a shiny black lump of coal. Thus, you are forcing me to PICK 5 ACTS.

Fiiiiiiiine:
1.  Elbow (in English)
I picked this band because of the name, but they've got a haunting, rich sound and tracks that range from upbeat to contemplative.
2.  Julian Casablancas (in English)
Retro tone, but cutting edge enough to be interesting. Irreverent and witty, WAY better than anything he did in The Strokes.
3.  Natacha Atlas (in Arabic)
I discovered her on the KINGDOM OF HEAVEN soundtrack, but it turns out she's a singer in her own right and one of the best voices I've heard in the French/Arabic mix you hear most often coming from Moroccan/Algerian expats living in Europe.
4.  O-Hum (in Persian)
The only thing better than gritty roots rock is gritty roots rock performed by Iranian refugees living in the Netherlands.
5.  A.R. Rahman (in Hindi)
Most folks are familiar with his more popular stuff (he did a song with The Pussycat Dolls), but I am more interested in his traditional music. That said, you pretty much can't go wrong with him.
There are, of course, at least 100 other acts I could mention if you hadn't press-ganged me so evilly into picking 5, but these should get you started. Fair warning: do NOT attempt to write to any of these. You will be so distracted that you won't get anything done.