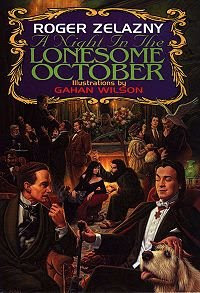 Lonesome October Night.mp3
Sci-Fi Song #11 is based on Roger Zelazny's A Night in the Lonesome October . This was one of the books of the month over at the Sci-Fi and Fantasy Book Club at GoodReads. Thanks to all of the members and moderators for picking excellent books each month and facilitating such intelligent conversation. If you aren't already a member, check it out and join.

Normally, I spend a long time editing and arranging my songs. I record each instrument and vocal part separately to a click track and spend about two weeks editing and tweaking sounds. This is a short, folky type of song, so I decided to take a different, more performance based approach.

I set up two condenser microphones; one for my voice and one for my guitar. I stood up in my living room and performed the song straight through without a click track. This is one performance with no edits. I went back later and overdubbed the harmonica and tambourine parts.

I had a great deal of fun recording the song this way. I don't foresee recording many songs in this fashion, but if a song calls for it, I would certainly do it again.

Hope you enjoy it,
John

Other songs inspired by the GoodReads Sci-Fi and Fantasy Book Club: